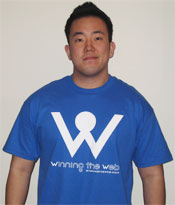 So currently, there is a little contest between Tyler Cruz and Mr. Park from Winning the Web. The basic idea is to attract people to both sites, and whomever attracts the most attention via votes, wins.

I usually wouldn’t post about such things, but I really enjoy the Winning the Web blog, and John Chow is supporting Tyler. This is my chance to show I have more blog power than John Chow. While it is strange to go against my fellow Canadians, I really want to see Winning the Web win. Both John Chow and Tyler are Canadian.

Not only that, but I got an e-mail from the owner of Winning the Web, asking for my support. In trade, I am hoping for one of those cool t-shirts he has been showing off. Blog schwag is the coolest.

Currently, Winning the Web is the front runner, with almost twice as many votes as Tyler Cruz. This is a little funny to me as Tyler has almost four times as many RSS subscribers, making Winning the Web the underdog in that respect.

Why would you want to take the time to vote? How does $100 sound to you? That is just one of the prizes up for grabs in relation to this little contest. In case you are wondering if Gyutae, the owner of Winning the Web, is a giving guy, just check out his previous contest, where he gave away a Free John Chow review, worth $400 USD. Not only that, but one thing you will notice from his site is a wealth of knowledge, and a whole community communicating with him and each other. Most of his blog posts have a fair number of comments, something that hasn’t really happened here yet.

Maybe Gyutae needs to write a post on getting comments…Wait, he already did that.

Winning the Web reminds me a lot of John Chow’s blog, in the way that it positions itself and its advertising. It should be interesting to see where Winning the Web is in a year from now. Check it out, give it your vote, and let’s beat the John Chow effect!

Update: Winning the Web won! And even better, I am told my t-shirt should be on its way soon. I am an Extra-Large. Big congrats to everyone that won the $100 prize, and I am sure both Tyler and Gyutae are very happy with the results.