Despite the economy not heading in the direct that we would like it to head in, this shift has created many new opportunities for bloggers and web workers in general. While marketing and advertising budgets will be the first to go in many companies, the side effect might be an increasing number of affiliate programs, where bloggers can start promoting the sale of various brand name products for a cut of the proceeds, becoming, in effect, the new marketing and sales team for many companies struggling to maintain a profitable balance sheet.

If you have ideas on how to make money online, your opportunity is at hand. You might have been or be looking at a potential layoff, so why not find some free time and spend it on building a blog, website, affiliate portal, or something that could, eventually, contribute to freeing you from office desk slavery.

With low startup costs, the only thing you have to loose is some time and energy, and the distraction might not be such a bad thing if the economy tumbles further.

Pick your favourite products or services, and contact them about some affiliate deal. Even if they don’t have a system in place yet, they might just say yet, in order to capitalize on the potential skills, energy and intelligence of content producers online. 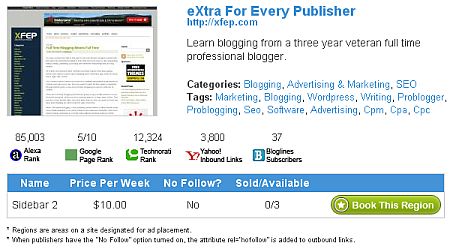 One of the mistakes I see most bloggers making early on is trying to stick to things that give them the biggest pay out. Unfortunately, certain referral and affiliate programs might have high rates, but horrible conversion, and widening your net to include smaller paying programs might get more conversions and end up making you more money in the end.

Darren Rowse recently covered this on his blog where a reader asks why he linked to a product using an affiliate link when the money made on each sale was to be less than five dollars.

What we, as readers, quickly realize is simple: every penny counts.

Darren was able to make over two hundred dollars in one day, from a variety of affiliate programs and product referrals that each paid out small amounts, but together, made a real difference in his earnings. If he was able to replicate that result, each and every day, pushing a fair number of sales to a large number of less expensive products, he would make six thousand dollars in a month.

It was counter-intuitive to how I thought of making money online, but his site is proof positive that just because a product only pays you a few dollars per conversion, doesn’t mean it is worthless, as it could convert quite well.

So lately I have been getting more contacts through my contact page on this site, and they are all directed at me to try out this new cool system.

The first guy, Cam, sent me a link to try out but it was via the tinyURL service, so I told him I don’t click on such links, and he sent me a link that included an affiliate ID. Never click on tinyURL links or any odd looking links, unless you know who they come from.

His e-mail is [email protected], if you want to help sign the dirtbag up for spam.

The second person to contact me, Steve Walters, wanted me to sign up for a service as well, where I would make tiny bits of income on huge ad deals, that would most likely never happen, and in reality would only make the original ad company huge amounts of money.

His e-mail address is [email protected], again, feel free to sign him up for spam.

The third person was Curtis Fullmer, who didn’t even try to hide that the link he was sending was a referral link. Even worse, he didn’t send it correctly, meaning if I did click on it, he would not have gotten the referral from me.

He said how excited he was for this new program, and when I called him no being a spammer and sending me junk, he said sorry, and said he was new to the blogging world. Two seconds later on Google, what do I find?

In his last e-mail to me, he said that he jumped to fast in e-mailing me, and I hope that this post, and any spam he receives will be a constant reminder for him.

None of these people tried to build relationships with me, they didn’t give me the option to sign up without using their referral ID, and they are just plain old spammers in my book.

Hopefully, none of you will be tricked by these people, and think twice before sending me any more of such spams. I am a friendly person, and I love new programs, but if you try to profit off me, and you aren’t a friend and disclosing that fact, then you shouldn’t be allowed on the Internet.