In my opinion there have been three generations of blog networks so far in the industry. The first was when Gawker and Weblogs Inc. made huge names for themselves and their sites. This was the first generation, and woke up millions to the potential and possibility of making their own network of content rich blogs.

The third generation is here and still developing. One network that stands out more than the rest as a third generation network is Splashpress Media. They have come in with a few decent sites, and bought their way into the RSS readers, and bookmarks of thousands.

I am only going to talk about five blog networks today. Mentioned above, these networks are ones you will want to join if you want to become a problogger.

The order is not from best to worst, but instead it is alphabetical. I think that the best and word is highly subjective, but all of these networks have been and continue to be huge successes in the blogosphere.

As of July 31st, 2007, 451press has claimed that they are the largest blog network in the world with over 329 different blogs. A few contacts I have in other networks didn’t like their claim, but the truth of the matter is that 451press has the most blogs currently, and they are working hard to keep ahead of other large blog networks. Covering every niche from the local city scene to television shows, 451press has built a large network though not necessarily having the most unique visitors or page views.

Officially opening their doors on October 2nd, 2006, it is nearly the one year anniversary of the network.

One thing that I am not a fan of with 451press is that their sites all look the same except for some minor tweaks. This limits the personality of the site as its own entity in my opinion and thus limits site growth as apparent by the design, the network comes first.

Why is it worthy of being in the top 5?
Well, being that it is the biggest in the number of blogs, and is looking at adding new sites every week, I think that they really have something here. As they continue to grow, they will be able to leverage the brand they have created by being in every niche. 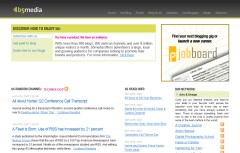 Another amazingly huge blog network is b5media. b5media was created by some of the blogosphere’s hardest hitters. With people like Jeremy Wright, Darren Rowse, and Shai Coggins at the helm, there is little reason why b5media wouldn’t be successful. Add to that multiple million dollars of venture capitalism money, and you have a business.

With their head office located in Toronto, Ontario Canada, they have an extra special place in this Canadian’s heart. b5media also covers the gambit of topics with over 250 in subjects ranging from arts and design to video games.

Like 451press, I have an issue with b5media, and that is that they have created two or even three blogs to cover a subject where one would do. They do have more customized themes for their blogs, allowing more of a brand to be created around each site, but I do wonder if sometimes blogs of a similar niche cannibalize each others traffic.

Why is it worthy of being in the top 5?
One of my idols Darren Rowse is part of the creators. THE Problogger. While it can be quite difficult to make a name for yourself blogging with b5media these days, in their earlier days, many of their bloggers quickly became well known in the industry, and some now make more money than myself and other full time bloggers. 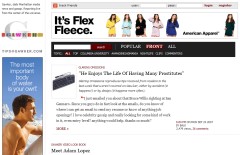 One of the first major blog networks, Gawker Media is looked up to by many networks just starting out. Created by Nick Denton, each of the 14 blogs are huge pillars of what a blogging network could be like. With each and every site being very well known. Sites like, Lifehacker, Gizmodo, and Valleywag.

All of the sites have a very similar structure in where everything was placed, to create a sense of unity, but each site is branded differently, and each site has become its own brand.

Unlike some of the other blog networks, you wouldn’t be working on your own site if you were hired to write for Gawker Media. They keep a limited stable of blogs, and only so many bloggers per site. This allows them to remain focused and most likely part of the reason for their amazing growth over the years.

Why is it worthy of being in the top 5?
Gawker Media blogs pretty much defined the niches they were in, and are some of the most linked to blogs in the world. I am a huge fan of LifeHacker, and I know many people who can’t help but read Valleywag and Consumerist every single day. 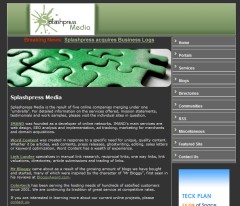 Splashpress Media is part of what I like to consider the third generation of blog networks. They grew from a small group of blogs, into a blog network powerhouse overnight by acquiring some key sites, and continuing to develop them.

Originally comprised of five separate businesses, Splashpress Media has come together nicely and continues to add powerful sites to its arsenal. Their best acquisitions including the Blog Herald, 901am, and Wisdump among others.

Splashpress Media has a pretty strong stable of writers now, but they are always looking for great bloggers to participate in their blogs.

Each blog has a unique design, and that allows for some great branding. All the blogs are tied in together by the Splashpress Media logo, but are otherwise designed for the niche the sites are targeting. I think this has been a very wise move for Splashpress, and will serve their sites well in the long run. The network isn’t as important as the blogs within. I think other networks should learn that.

I do think though that Splashpress Media should update their network home page to at least reflect their updated logo.

Why is it worthy of being in the top 5?
I know a few people that expected Splashpress Media to fade into the background after their purchase of the Blog Herald, but they surprised everyone as they continued to add new blogs, either by creating them or buying them and even better, a few of the blogs became very powerful in their niches. The biggest shock was when Performancing was bought by Splashpress, but it really cemented them as worthy of being one of the top five blog networks. 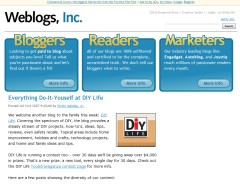 Weblogs Inc. was founded in September of 2003 and now has over 90 different blogs in its network though some report that only around thirty are really active, and less than half are considered high level blogs.

The company was founded by Brian Alvey and Jason Calacanis with an initial investment from Mark Cuban. In October of 2005, Weblogs Inc. was purchased by AOL for a reported $25 million dollars. When this happened, everyone decided it was time to give blogging a try, and the whole blogosphere quickly ballooned.

Much like Gawker Media, all the blogs share a similar design, with some color and header tweaks to make it look unique. This has worked for them, but I find the designs to be a bit stale, even their newly refreshed attempts.

I am not sure how easy or difficult it is to get a position at Weblogs Inc., but being owned by AOL, I would guess it is at least as hard as getting a job for AOL.

Some bloggers I know attach a stigma to working for AOL, myself, I’d love to write for sites like Engadget or Joystiq.

Why is it worthy of being in the top 5?
This is one of the two progenitors of all other blog networks. It was acquired by a major company for $25 million dollars. What is even more interesting to me is how unlike other services under the AOL name, Weblogs Inc. didn’t get worse due to their new ownership. Sure things have changed, and so the current quality is subjective, but at least it didn’t get moved to AOL subdomains, or changed like the recent Netscape to Propeller move.

So there you have it. The top 5 blog networks according to me. Sure, there are other networks that get more page views, or make more money than some of the ones listed above, but I think looking at the history of some on this list and the potential of the others, you can agree that these networks are very powerful, and a job with them could mean both some serious self promotion and/or some decent wages.

Blog networks have gone from friends working together to become a real business model, much like a magazine company with multiple niche focused publications. If you want to be a full time problogger, a network could be the key to help you achieve that goal. Just make sure you choose the network that best fits your goals.

Full Disclosure: I work for Bloggy Network, and I would have put them in the list, but I figured that was a conflict of interest, so I used them as a comparison point for all the rest of the blog networks on this list.